Parallel Launcher is an easy to use launcher for the ParallelN64 and Mupen64Plus-Next emulators, featuring very easy controller configuration, automatic loading of ROMs from given folders, and automatic setup of optimal settings. 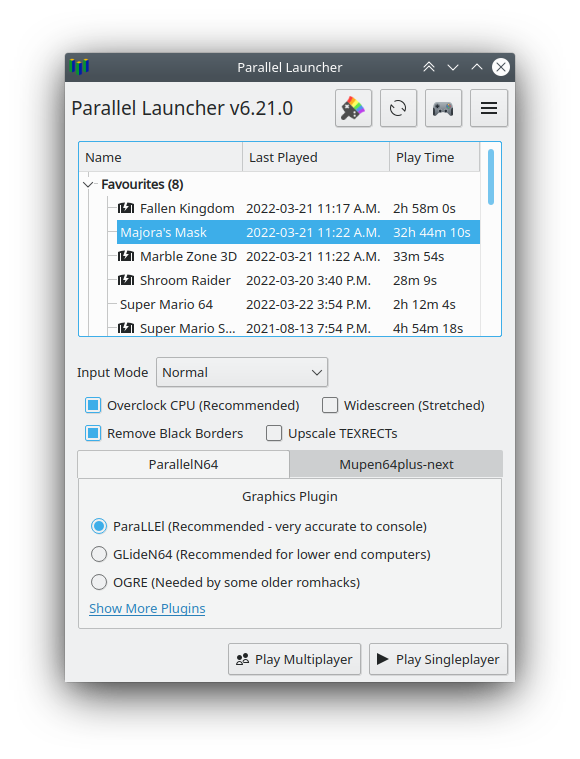 Currently, the most widely used N64 emulator is Project64. While it is the most popular emulator, it suffers from inferior performance and accuracy compared to other emulators, and most graphics plugin developers have dropped support for Project64 in favour of supporting more modern emulators, leaving Project64 with very out of date plugins. Most notably, it does not support the ParaLLEl graphics plugin at all, which is the first graphics plugin that is able to correctly emulate N64 graphics with near perfect accuracy in real time.

The ParallelN64 emulator, on the other hand, is fast, accurate, open source, runs on every operating system that matters, and supports the ParaLLEl graphics plugin as well as a number of older plugins too. There's just one problem: as a libretro core, it must be run through RetroArch, which is infamous for its confusing user interface, especially its controller setup interface. As a result, many people give up on trying to configure it and simply use Project 64 instead, which is much easier to setup.

Parallel Launcher aims to give you the best of both worlds by providing a very simple interface that takes care of configuring RetroArch for you, allowing you to have the accuracy and performance of ParallelN64 with the ease of use of Project64.